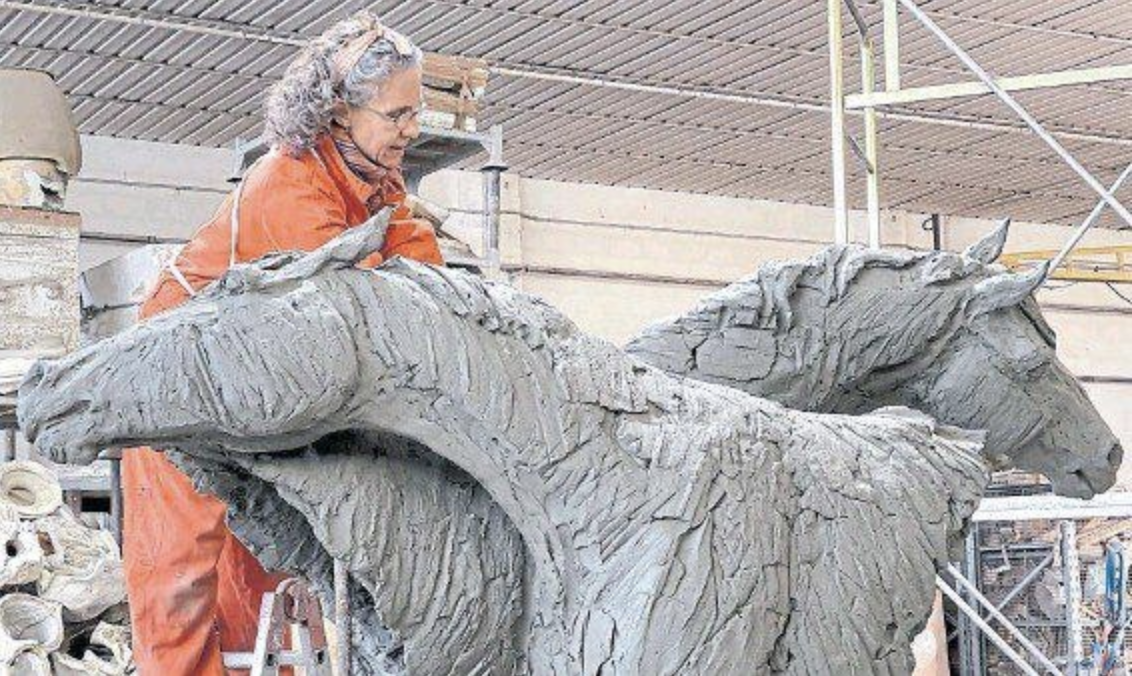 ROME.- Dreams can come true even in a pandemic. Such is the case of the Argentine artist Vivianne Duchini, who without ever having imagined it, in a traditional workshop in Florence, has just finished in Clay a sculpture of two horses that will end up being in bronze and that will open in April next year in the framework of the Venice Art Biennial.

Porteña, 58 years old, and passionate about both bronze sculpture and horses –they are his several works that can be seen in spaces of the Capital and Greater Buenos Aires, such as the tropilla of the Four Seasons Hotel or the mare and foal of the roundabout of Avenida Márquez, in San Isidro–, Duchini told the nation how this “dream” of arriving with his work in Venice became reality. Another Argentine artist, Claudia Fontes, in 2017, arrived at the Venice Biennale with the same animal through el problema del caballo, a shocking installation with which she represented the country that year. But Duchini’s is a different story.

“It all started when, during quarantine Isolation last year and after having to suspend an exhibition at the Isaac Fernández Blanco Hispanic American Museum, I contacted an Argentinian living in Venice on Instagram to help me set up my website. He works at the European Cultural Center in Venice, where they were delighted to see my work. And that’s how I was invited to exhibit individually next year at the Giardino della Marinaressa, a public park, within the framework of The Art Biennial 2022,” said the Animalist sculptor, who already has more than 400 works under her belt.

Como she had to finance the project, which is a monumental work of about 400 kilos and involves the ancient craft of casting in bronze, began to look for budgets. “I realized that it was right for me to do it directly in Italy because the cost of moving the work by boat was going to be impossible; I went to find out and found a workshop in Florence, The Cradle of art and which is historically the center of bronze casting. A dream for any sculptor who worked in bronze for 30 years like me, ” she said, full of enthusiasm.

For her “dream” of traveling to Italy and arriving in Venice to come true, it was essential, logistically and emotionally, the help of her close friend, Teresa Estrianese, an Argentine who has lived in Rome for more than 20 years. “She accompanied me from the first moment, she made me a driver, a translator, a manager, she cut the clay. It was indispensable” ” said the artist, who during her stay in Florence, now in Rome and thanks to The Venetian curator of her work, Laura Vattovas, also managed to get several sponsors.

“I am living a dream, people are very open and other projects were emerging, for example, with an artisan from the famous Piazza San Marco in Venice to spread what it is to work in direct wax, which then melts into bronze, through talks at the Centro Cultuporteña,

The pandemic on all fours

How is the monumental sculpture, 2.50 meters long, 2.30 meters high and 75 Wide, 300 kilos, plus the base, which in total weighs 400 kilos, which in April next year will be installed for 7 months, until November, in Venice?

In the foundry in Florence, where the clay part of the work has already been completed, now they have to pass the rubber-silicone negative. “The cast is made to pass in wax and once ready, the casts are prepared for the process of casting in bronze to The Lost Wax. Although they are artisans with great experience, artists are obsessive, so for that moment one has to be in control,” he said, saying that he plans to return in a couple of months, after returning earlier to Buenos Aires.

For Duchini the one she will have in Venice will not be the first solo exhibition in Europe. In 2019, he made and placed in a public space in Budapest, Hungary, the sculpture of Janos Czetz, a procer, of course on horseback, after winning a competition. But, he confesses, arriving now with his horses to Venice “is to touch the sky with his hands”. the idea also arose to do something with the glass artisans of Venice, as well as with the bronze artisans of Florence, in relation to Argentina. The goal is to resurrect the work of bronze” which is being lost, ” he explained. “The truth is that it inspires me a lot to be here, beyond that we are in an era horrible, with restrictions, more than a hundred thousand dead, but for me it is a very creative,” he added Duchini, married since more than 30 years ago with Hugo Dircie, another horse lover, rider, professional and jumping champion, with whom he had two children already large, 21 and 31.